You cross into Iran from Turkey at Barzagan. Iran is still an Islamic state and it enforces a strict dress code for women. In the 80s it wasn’t necessary to wear a chador but women were required to dress modestly and cover their hair. Alcohol was forbidden and it would be very unwise to attempt to bring any through customs but as you've probably guessed by now - we did!

It is hard to believe(but it was pre-internet days) that we were not aware of the size of the conflict between Iran and Iraq. We knew a war had broken out but in our naivete we assumed it was a skirmish.

First time travellers are often surprised by the western feel of the country – and this was still evident during the early eighties in the heyday of the Ayatollah Khomeni.   However, it was also not hard to see or feel how radical Islamic ideas had changed the place.

From 1980 onwards groups of travellers wishing to transit Iran were required to carry (and pay for) a customs guard to travel with you across the country.  The guys we carried were terrified always exhorting us to keep the curtains closed and for the girls to cover up.

You can choose to take the direct route to Tabriz and Zanjan, then south to Esfahan, avoiding Tehran. Esfahan is the cultural capital of Iran, and is still the favourite destination for people wanting to purchase carpets and gold jewellery.

On our first reverse itinerary we had intended to stay in Esfahan and possible do some trades in gold jewellery.  We had basically driven non-stop from Zahadan but got the timing wrong and approached the city about midnight.  I was meant to be navigating but had fallen asleep.  This combined with the fact that any signs in a Roman script had been removed made accurate navigation problematic.

I had devised a plan (prior to nodding off) that would take us to a hotel that had been recommended to us but instead at about 3:00am we were in Esfahan's central square trying to get directions from Iranian garbos.  The driver and I were exhausted but we had no alternative to push on and find somewhere we could pull off the road. 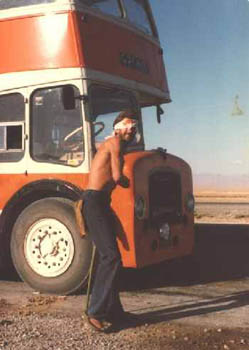 Fate and the Ayatollah then combined to play a part in finding us a place.  We had just reached the outskirts of the city when a sedan rushed past us at speed and quickly cut us off.  The driver gestured to us to stop and advanced menacingly towards the cabin with a drawn pistol.  We stopped and Trevor and I got out - it was only then did we see another, very young,  Revolutionary Guard behind a nearby fence covering him with a very large machine gun.

We took the hint and when ordered to follow the vehicle we did so.  We ended up "prisoners" at the Revolutionary Guard headquarters.  It looked like a medieval fortress except that it was sandbagged at the top and protected around the perimeter by machine gun totting guards. They looked like they were expecting someone!

This all happened at the time when the hardliners had just removed the new President for not being radical enough and their were rumours of US intervention. However after a couple of hours they realised we were not the advance guard of a third force and that keeping us was more trouble than it was worth.

In the past most overlanders headed for Afghanistan but that country has not been on the overland route since 1979 and the rise of the Taliban. So your choices included exploring a little more of Iran or heading for Pakistan.   From Esfahan it is an easy drive to Shiraz and the nearby ruins of Persepolis. This famous city was built by the Persian king Darius the Great, only to be destroyed by Alexander the Great during his conquest of Persia.

If you don't do the touring option (and our customs guards were not keen on that) from Esfahan your only choice is to follow the old southern trade routes across the Dasht-e-Lut, via Kerman to Zahedan. The way is punctuated with caravanserai and desert fortresses. The drive is a long one but the roads are generally straight and well made. 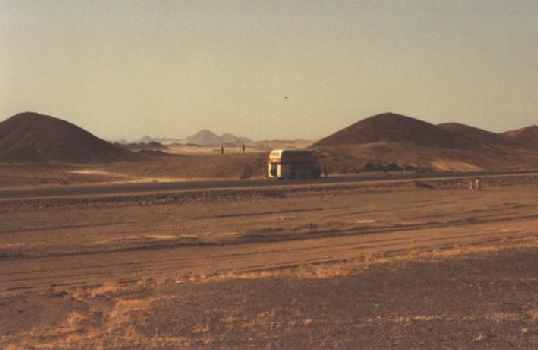 The American influence in Iran was still visible in the oddest spots.  Dotted along the highway near petrol stations were Iranian equivalents of "fast-food" stores.  These places could have been any McDonalds or KFC the world over, the architecture just gave it away.  Though it must be said that the similarities ended there - the most available fast food was the lovely flat naan (an Iranian bread) or small chicken kebabs roasted on tiny roadside BBQs outside the bigger outlets.

Zahedan is either the first or the last town in Iran, depending upon which way you are travelling.  Either way it is an interesting place, though the comparison with the Pakistan is the more min-blowing.  Despite the big desert skies and the dust Zahedan has an order about it that welcomes and reassures a traveller.

Just as well it's laid back as on my first visit, just after Bani Sadr had been deposed by the Revolutionary Guards, I went shopping with one of the girls who was blonde and only wearing the flimsiest of sarongs.  It was a good measure of the place that we did nothing more than raise eyebrows from the people.

Crossing the Baluchistan desert was and is still now the only viable route into Pakistan, but this is an area where the Overlander has always had to exercise the most caution. The people are not unfriendly but you must realise that in this harsh but exotic landscape it is you that is the oddity.