I found India and Pakistan to be like brothers who quarrel, both always looking for an opportunity to wrong foot the other. When leaving India in 1981 the Indian customs officials spent their time humiliating poor Muslim travellers who were crossing the border on foot and then after waiting hours for the paperwork and passports to be checked they waved us through with hardly a glance. 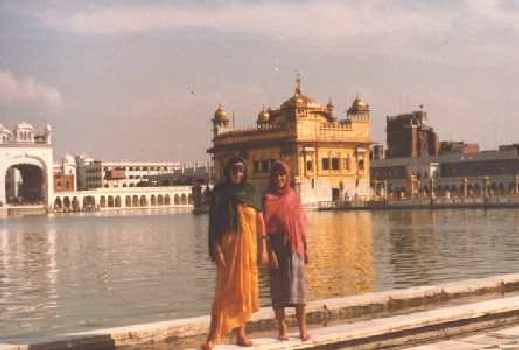 India offers the overland traveller an almost endless array of unique itineraries, though most take the direct route to Nepal. The first stop in India is Amritsar, the centre of the Sikh religion. Even though his holy Sikh shrine suffered a deadly assault following the assassination of Indira Ghandi it has been repaired and is a must visit destination.

We stayed in the grounds of the Amritsar Youth Hostel and during one stay and, at that time, it was also the venue for the North India Dentists' Convention. I remember being quizzed by one of the delegates as to the age of bus and he was blown away with amazement that any vehicle 25 years old could still be running!

From here the adventurous can strike northwards to Jammu and then the twisting and climbing drive into Indian-controlled Kashmir.  Our buses were too high for the tunnels and so we risked everything by hiring a local bus for the journey.  On my last trip we splurged and hired a series of taxis. One couldn't be sure what was the wisest choice as on each trip we encountered at least one bus, truck or car that had failed to take a corner with fatal consequences for the occupants.  We felt quite bullet-proof and it is only with the passage of time that I realise that the element of risk was far greater than I had estimated.

Srinigar, the capital, sits in the vale of Kashmir and is one of the most scenic and unique destinations in India. Even in the 1980s the tensions between the Muslim majority and the Indian administration were evident but today they have all but killed tourism to the region. We stayed on Habib's oddly named Houseboat Australia.  Habib always made our stay a highlight of the overland experience.  All the overland companies used his boats and he had a very easy manner.  However, not all the residents of Srinigar shared our views and it reflected the split between Hindu and Muslim and between rich and poor.  On one occasion after being out riding his motorbike, I was waiting outside the post office for him when a group of Muslim youths approached and warned me off associating with him.  Perhaps an early warning of the problems that beset this community today? 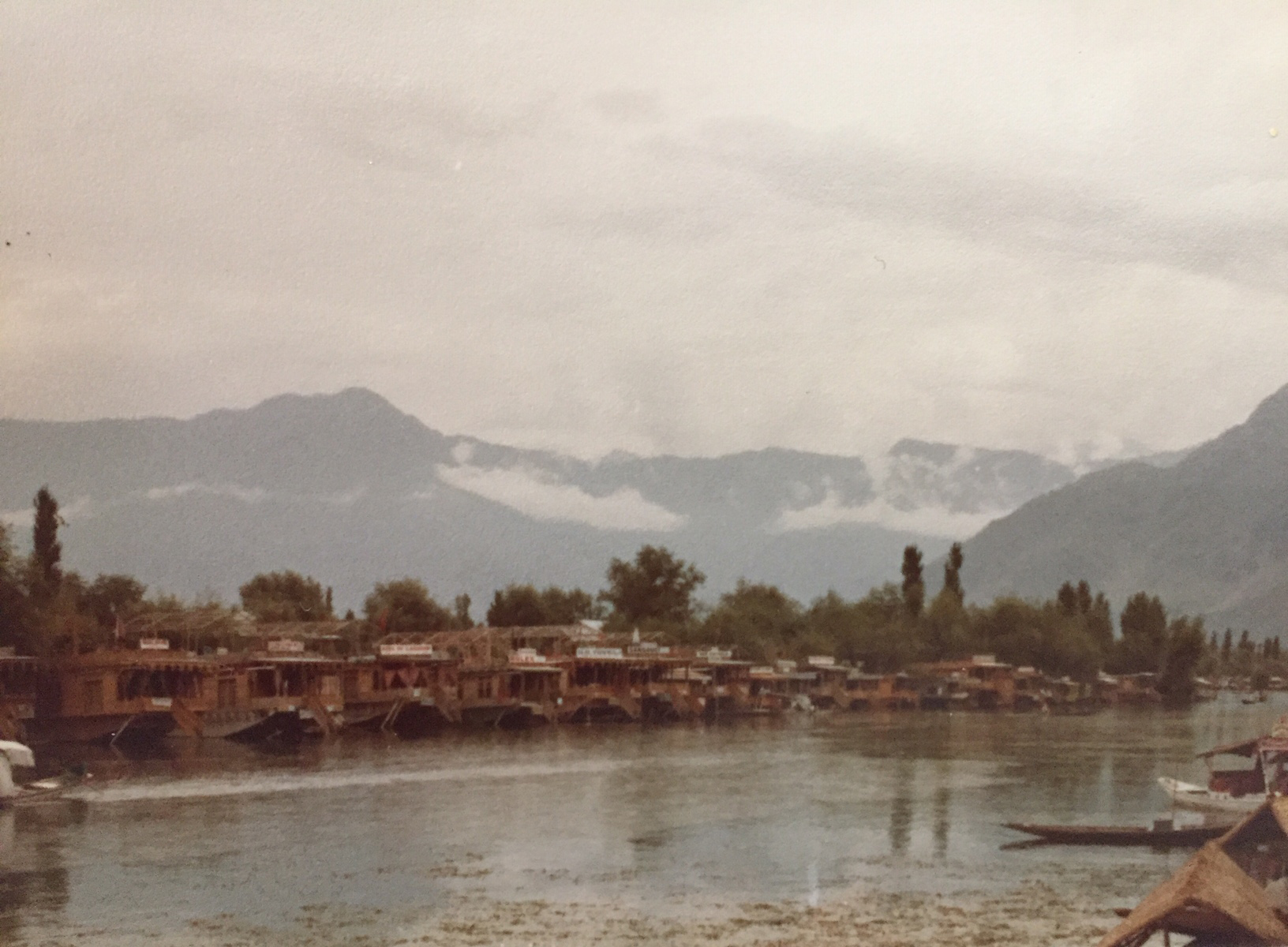 The houseboats were unique with intricate hand-carved Indian motifs on the outside and complemented on the inside by an amazing Victorian chintz-style of furnishings.  Each house boat had a bathroom, two bedrooms, and its own lounge room - very spacious and so indulgent by the standards we had come to accept as normal.

The ubiquitous shikaras, narrow local boats, plied the lake selling and transporting anything and everything.  You could buy Limca (India's answer to Coco-cola), flowers, hashish and even chocolate biscuits!  We would regularly hire a "party boat" which would slowly punt us around the lake by moonlight whilst we enjoyed a moghul feast, too much booze and hash.

On my second visit we journeyed to the Gulmarg, the Vale of Flowers, in winter.  This winter playground boasted a single rope tow and access to the slopes was made by stout short-legged ponies who were buried up to their flanks in the snow.  The skiing was was most unremarkable but like much of worth in life, it was the spectacular journey that was unforgettable.

No options but to again retrace your steps to Jammu from where the route takes you on to Delhi, the capital city of India. The most important advice to anyone visiting is to avoid the hot summer months when temperatures regularly hover in the 40’s. The city itself is a rewarding destination in itself but it is also the staging post for travellers heading in all compass points.

Options include the desert state of Rajasthan, or travelling further south to Goa, or alternatively the hill stations of the Himalayas. Simla, the Kulu Valley and Manali are great spots in which to relax.

We stayed in a camp site, now gone, in Asaf Ali Road a couple of kilometres from Cannaught Circus.  The accommodation for those wanting to get off the bus were a round whitewashed huts with a thatched roof that would have looked more at home on a south seas setting that the hot and dusty plains of northern India. However, you got no complaints everyone was so please to be off the bus.

Those following the main overland route to Kathmandu leave Delhi for Jaipur in Rajasthan. Here the attractions include the famous pink city itself. The intriguing Palace of the Winds from where the concubines of the Maharajah viewed the passing cavalcade of life continues to attract the attention of travellers. 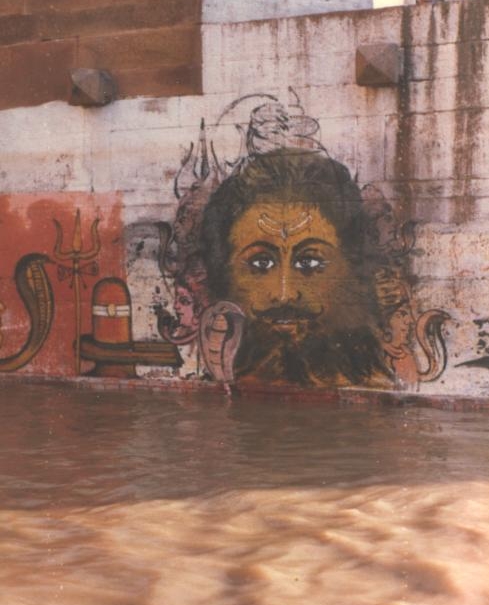 From here the route takes you eastwards towards Agra and the Taj Mahal, the highlight of any journey to India. The Taj sometimes surprises visitors with its small physical imprint as its image is written so large in our minds. The story behind its construction and the fate of its creator strikes at the heart. Built as a mausoleum for his beloved wife by Shah Jahan had intended to build another tomb in black for himself on the bank opposite. However his son, deposed him and imprisoned.

Another amazing place the traveller needs to visit is the abandoned remains of the city of Fatephur Sikri. Built by Akbar the Great, Fatephur Sikri, is one of history's great follies as it was abandoned only 18 years after being completed due to a lack of adequate drinking water. However, it provides does provide the visitor with a superb idea of the scope and scale of this wonderful Moghul city.

The overland route continues east towards Varanasi and the sacred Ganges River one of the holiest places for Hindus. Arrange an early morning visit to observe the cremations on the ancient stone ghats. The size and swiftness of the river and the poignant ceremonies being held along its banks can help but affect the traveller deeply.

Not far away is Sarnath another holy city but this city is sacred to Buddhists as it is the site of the Buddha's enlightenment. The stupa that makes the spot is very simple and unadorned in direct counterpoint to the predominant Hindu style. The park land in which it sits is an oasis of calm within the frenetic cauldron of Indian life – enjoy the serenity it offers!

The road to the foothills of the Himalayas takes you through quintessential rural India; small villages, narrow roads and an amazing assortment of people and animals. Despite the remoteness it is hard for a traveller, especially a western one, to feel alone. When the need for a rest break became necessary the driver looked for the loneliest stretch of road. Then with military precision, everyone marshalled themselves near the doors, Girls to one side and guys the other. You probably had two minutes to dismount and toilet before a throng would somehow have assembled itself from what had appeared an empty road.

One one occasion a succession of flat tyres demanded us to stop in the smallest of establishments to carry out the repairs. Our presence in the town first aroused interest and then, somehow, consternation as a crowd of at least 100 surrounded the bus. Most of the punters retreated to the upper deck and with a few guys we attempted to keep the crowd back from the bus. The situation became so dire that the armed police arrived and surrounded us. They made entreaties to the workers at the tyre shop to speed up the work and as we departed we were farewelled with a shower of stones from the gathered throng. A good example how things teeter on the edge in India and how incidents can spring up out of nowhere.

The last Indian camp site was a quarry and brick kiln just a kilometre or two from the border. We found American Marlboro the best form of baksheesh and we joined the two nightwatchmen in their compound for the night. As dusk settled, we bombarded the trucks trundling up to the border with an array of fire-crackers and rockets. Being India this pyrotechnic madness was regarded with good nature by the passing truckies as just par for the course!