The border post on the Iranian-Pakistan border at Mijaveh/Taftan used to be an odd collection of huts with little form to suggest their purpose.  From what I've read very little seems to have changed. In so many ways the difference between the two countries served as a reminder that we were about to experience a new culture, a new way of living. Despite everything, the Pakistani customs don’t pose too many problems that a lot of patient waiting and a little baksheesh won’t solve. 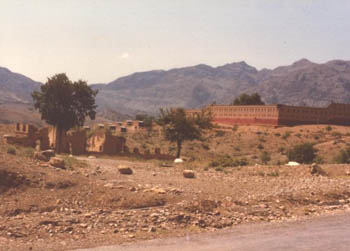 Travellers were advised to over-night at the border post and begin the next leg of their journey across the Baluchistan desert at first light.  We of course didn't follow this advice and would move on as soon as we got the clearance from customs. The quality of the road through the desert to Quetta is variable, to say the least. As it is constantly affected by drifting sands and flash floods the motorist will experience some hazardous driving conditions.

On one occasion we got ourselves quite disoriented at night and decided to stop on the outskirts of a small village.  It was oppressively hot, we had only a little water and no booze.  Despite all this there was a magic to the place and we spent much of the night smoking and chin-wagging.

Access to fresh drinking water was a problem and you are advised to bring supplies from Iran.  You will see desert wells off the road and even a couple of roadside ones but it would be fool-hardy to rely upon them, especially for drinking water.

It was here in the middle of the Baluchistan desert on a reverse itinerary that we boiled Belch so I hitched a ride back to a well with a heavily armed group of Pakistanis in a Landcruiser.  From these guys we learned that there had been another revolution in Iran and Bani Sadr had been deposed as President and the hardliners had taken over. We were advised not to continue on into Iran.  Of course we did - we had no option!

The road into Quetta leaves the desert plains and crosses the mountains that fall down from Afghanistan through the Bolan Pass.  Depending on the season it may be possible to stop and bath in the swift and cold waters that offer a remarkable contrast the harsh and rock terrain. At this point you are within a hundred or so kilometers from Afghanistan and as a wild area with few signs of government infrastructure or authority.

You will want to stop and revive yourself in Quetta which remains very much a frontier town.  Architecturally it still  wears, with many a cantonment in Pakistan and India, its British colonial legacy.  In its environs you come across a multitude of interesting people; Afghanis, Baluchis and Pathans.  Everyone is armed to the teeth but the ordinary traveller has traditionally been safe, providing they take the necessary precautions of travelling during the day and respecting local customs. 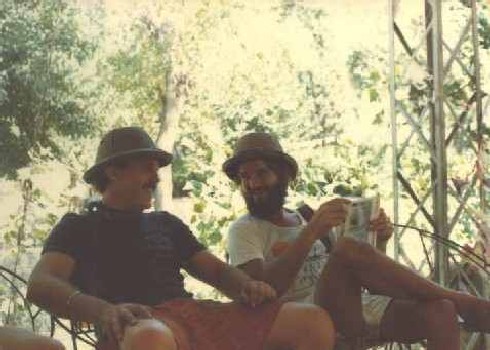 It was in Quetta where we would unload our whisky that the driver had purchased on the ferry as we crossed the English channel all those months previously. We used to use the services of a man known as the The Captain. He would brag, "I don't just know who drinks in Quetta but what they drink!" We would also repeat the dealing on the return journey but this time we would have cheaper Indian whisky to sell. The Captain also made money by buying permits which overseas tourists could get that enable them to purchase alcohol.

However, The Captain was also a rogue, to put it mildly. A few months after my last trip another crew declined to do business with him and sold their whisky elsewhere. Within hours, he had alerted the police who arrested Bruce, the courier.

That night in prison he met a well-educated Pakistani inmate who was the son of a former Defense Minister. He had been goaled away from his district but the authorities knew that 'what goes around comes around' and treated him with extreme deference. With this man's patronage our courier survived and even drank his own whisky that first night in prison. And yes, when the President of Pakistan was killed in a plane crash and a new regime was installed both walked free. A great example of how privilege and power co-exist in that part of the sub-continent.

The route takes you eastwards to Sukkur and Multan.  From Sukkur you are driving on the main north-south highway that links the southern port city of Karachi with Lahore.  The highway criss-crosses the amazing expanse of the Indus River which cuts a deep, fertile gash through this very dry land.

The adventurous (and those with too much time on their hands) will turn south for Karachi.  The drive is a long and dangerous one with the amazingly ornamental Pakistani trucks risking everything as this push their over-laden vehicles to the limit.

We did the trip there by train from Lahore on one reverse itinerary. I purchased first class tickets - or so I had thought - and turned down the opportunity from a Sundowners crew who like us were headed to Karachi to pick a group that was over-flying Iran. Our first-class tickets appeared to be something like first tier of cattle class! Despite the heat and discomfort we all survived and even enjoyed the night's journey.

Karachi was a dirty and dangerous city with its huge population focused on making the most out of their hard daily lives.  We had been given the name of a private hotel - the name now sadly forgotten - which was a fantastic bolt-hole in this amazing city. It was as if you had stepped into Kipling's India with a huge house with large rooms and great verandahs surrounded by high walls and green grass. The main attractions for tourists and locals alike were found in the carnival that appeared to materialise each evening on its polluted beaches as the population sought relief from the day's oppressive heat and dust.  We drew a lot of attention and a couple of Pakistani guys really wooed the girls, with one of the girls falling head of heels and promising to return. These guys took me and the girls out into the countryside one evening in four-wheel drives. We took rifles, ostensibly for hunting, but perhaps more likely for protection. I felt bad when they pulled into a village late and roused the occupants of a house who made tea for us. A good two day drive to the north west of the city takes you to the ancient ruins of Mohenjadharo.  However, the security situation on those roads even in the early eighties made it a risky proposition. Another destination I wish I could have visited. 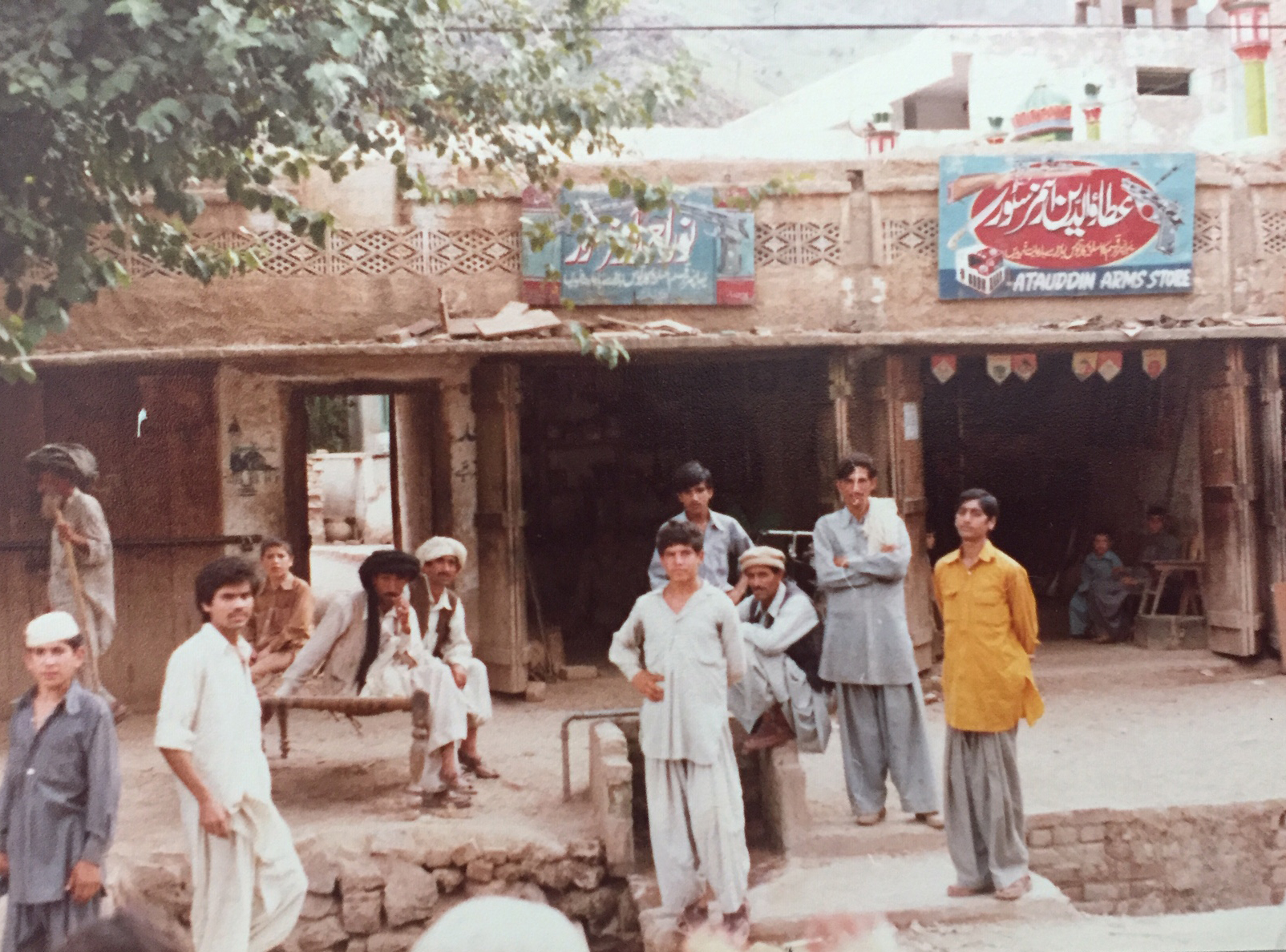 Most travellers then and now would turn north for Lahore, in the centre of the Punjab.  This region is the breadbasket of Pakistan and the city is Pakistan’s richest.  Its attractions include its Moghul Red Fort and the Shalimar Gardens. Female travellers will experience more difficulties than males in Pakistan and the situation is no different in the city than the countryside.

Lahore is an ideal centre for having any mechanical repairs done cheaply.  In 1981 the bus’ bodywork fell across the chassis and this with the reverse journey to London still ahead of us.  The first quote was a staggering ₤2,000 – more than the bus was worth!  However, when the reality that we wouldn’t or couldn't pay such a sum set in our ingenious mechanics cobbled her back together again for a fraction of the price.

For travellers needing a taste of home the cure then was a quick trip to the diplomatic precincts of Islamabad, Pakistan’s capital city.  Just a short hop up the Grand Trunk Road past Rawalpindi you could find cold Australian beer and frozen beef steaks! With not much else to recommend it, travellers still head north-west to Peshawar.

This was and still is real frontier territory, bordering on Afghanistan.  It is tribal land and government control is more apparent than real.  You could buy anything you wanted with guns and drugs being at the top of the list. The village of Darra was in fact the smuggler and gun-runner's ultimate paradise with machine guns, pistols, mortars, rocket launchers on sale and not to forget fountain-pen size, single shot 22 calibre guns, all on open available in the market.

From Peshawar you could also explore the Khyber Pass going only so far as the Afghanistan border.  We did the journey only to say we had done it. Once again it then became a case of retracing your steps – this time back to Lahore.  You enter India at the Wagah/Attari Road border post, a very short distance from Lahore.

Be prepared to wait as strict times of opening and rampant bureaucracy of both sides of the border can frustrate even the most hardened and experienced travellers. When leaving India in 1981 we had followed the German tour company Rotel into the Pakistani customs area and were optimistic about getting away quickly as the Germans had completed the customs checks within minutes of arriving.

The source of the Pakistani speed and efficiency seemed to evaporate as our two double-deckers hoved into the compound. We had adopted our normal protocol for border crossings - clean t-shirts and sandals to be worn, beds made, clothes neatly stowed and the kitchen area spotless but this did not appear to impress them. So we waited and waited.

After a considerable time the source of the delay became apparent. Rotel had paid $20 to be able to decamp promptly. I stressed the fact that we were only poor Australians, not rich Germans, and that such a sum was beyond us. We received no sympathy and we just wallowed longer on the concrete apron as the cool of the morning evaporated.

Initiative was what was required as in all truthfulness we were just poor Australians. In the second bus one of the punters had a Playboy magazine and I pressed it into service with the tantalising entreaty that "I had something better than money".  It worked - I was quickly ushered into the office with the entire cohort of customs officials in tow. As the magazine was passed around the head of the customs sat down in his chair and asked if I wanted a 'smoke' and then began rolling a joint! I quickly refused and headed for the exit with passports in hand.

We reached the boom gates and my bus was allowed out but they stopped the other bus - they wanted another magazine. We drew the line at their rampant greed and after a standoff they too were allowed out.

When leaving India in 1981 the Indian customs officials spent their time humiliating poor Muslim travellers who crossing the border on foot and then after waiting hours for the paperwork and passports to be checked they waved us through with hardly a glance.